Snow started falling on Sunday afternoon and by any standards it wasn’t that heavy where we live. Buy hey this is England and any snow is bad news. As a nation we are totally unprepared for it and every thing grinds to a halt. Admittedly it was heavier in central London and everything there effectively stopped – Buses, trains etc.

The first I knew about it was on Friday evening when Sarah rang me up to tell me it was on it’s way. She suggested that I might like to bring anything I needed to do on the Monday home with me as she knew what I would be like if I was trapped at home. So I packed up the edit suite and took it home with me – I would be thankful I did by Tuesday.

After the initial snow fall it calmed down a bit and then more snow fell later that evening. I was expecting more to fall overnight but when I woke up the next morning it hadn’t. I got up to go to work but when I put the radio on it became apparent that I wasn’t going anywhere. There were no trains running out of Gillingham towards London and almost all of the schools were closed. I rang the office and was told that the car park was solid and they couldn’t get the trucks out so I figured that staying where I was would be the best option! 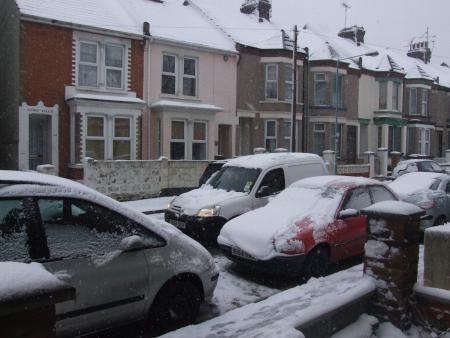 So I set up my edit suite in the dining room and got on with some work. The problem I had was that I had a show installing that afternoon so I spent most of the day on the phone trying to sort out what was going to happen. I’ve been doing this for over 20 years and this is the first time I can remember us being defeated by the weather!

This post was delayed because I forgot to publish it!

I was at a conference the other day and the delegates were given a tree as part of the companies drive to save the planet!

They were also given hand warmers as they left which had the instructions on the back “to re-activate place in a pan, bring to boil and simmer for 10 minutes”

Is it just me or would the amount of energy used to reactivate the hand warmer every day for a week barely be offset by the planting of the tree!

Edited to Add: the tree is currently fighting for it’s life due to the time it took me to get a plant pot to put it in. As I type it’s touch and go. This hasn’t been helped by the sudden dissappearance of some of the leaves that were still alive. I bet it was the cat!

I had a meeting earlier this week at the Houses Of Parliament for an event that one of my clients is holding. As it was just after the snow my train was half an hour late arriving in London so my clients had already gone in.

When I got to the visitors entrance I told the Policeman that I was there for a meeting and the name of my client. He pointed me down the path to the new visitors security entrance. Once there I had my photograph taken for a pass and my bags were put through the security x-ray machine. I went through the metal detector and was duly searched.

On the other side I went through the hall and found my way to the central rotunda between the Commons and the Lords. I wandered into the private dining rooms to find my client but couldn’t.

The stange thing was though……

….nobody actually asked my name or even checked that I did actually have a meeting there.

You know how supermarkets always pretend to care about the environment? Well I bought the above from Asda and when I looked inside this is what I found….

I can’t help but feel this falls into the unnecessary packaging category. I know the packaging is recyclable but not every one does do they? And it takes up more space in the truck that delivers it meaning more road journeys. Then there is the energy it takes to make the larger box, use of resources etc etc

And then of course there is customer disappointment!